The Truth of War

What did we learn about in this project?
In the Truth of War project we listened to the Ken Burn’s documentaries and read chapters of the The Things They Carried by Tim O'Brien. I learned about the struggles, horror, and truth of war. I learned what it was really like in Vietnam, told by a veteran. I learned something interesting from George, the veteran I interviewed, he said there were girls who would come to the base camp and sell heroin and their bodies to the soldiers. He said that when the girls didn't come, he knew there was danger ahead. I learned that the Vietnam War was not just devastating for America, but even more devastating to Vietnam. Vietnam will forever be devastated when it comes to the Vietnam war. The innocent civilians that were killed, the bomb craters, and the many years the Vietnamese lived in fear. I learned veterans would come back home to nothing and left homeless. The American veterans would be spat on by other Americans. Mostly, the veterans would come back home with PTSD. The PTSD consisted of bad nightmares, sleep insomnia, and depression. They did not come home the same person they left with, and the families were never the same.

How did we exhibit our learning?
My class and I exhibited a jungle-themed exhibition to present different perspectives of Vietnam, the Battlefield of Vietnam, and the Soldiers Emotions during Vietnam. We constructed these subjects into 6 different rooms. My team and I took charge of the Soldiers Emotions room. Our room had a acting scene, where we had actors dressed up as soldiers in combat playing cards and smoking fake cigarettes. We had a interactive part of our room, where our audience would take a family photo and pretend it’s their family. By the end of our room they’d drop it back into a bowl, like they were leaving their family behind, just like many of the soldiers had to do. In our room we also had a interview we took of a veteran. The video had a powerful and emotional statement. George said, “War is the most horrible thing humans have ever done.” We projected the interview on the wall and replayed it through the presentation. Along with our room we had small things displayed for example, real pictures of Vietnam during the war. These pictures were given to us by a veteran we had interviewed. We had written, soaked in tea, and burnt the edges of letters that were sent home from soldiers in Vietnam, hanging from our room for people to read.

How did you strengthen (or not strengthen) your skills during this project? How did you stretch yourself?
During this exhibition I noticed I was collaborating with my team more than I ever have before. I stayed after school overtime both days, helping set up other people’s rooms. I think I could’ve collaborated more during the time we were writing our museum text and the design of our room. I could’ve presented more of my own ideas and helped refine the museum text. I was challenged when I had to act. I have never acted before, but it was easier than I thought even though I was pretty nervous. I was challenged by working together with my team because I wanted the room to look like what I wanted, but they wanted something different. It was hard to see the room I had imagined in my head to turn out totally different. Even though the room didn’t turn out the way I wanted, it turned out beautiful otherwise. This project seemed impossible with only 2 days to set it up, but with the help of all the students working together, we made it happen and it was one of the best exhibitions the school has had! The project managers and Ally Johnson were the backbone of the project and without them, there wouldn’t have been a great exhibition. The project managers and Ally couldn’t have done it without us either.
​
How did this project change your thinking? What enduring understandings will you take away, and why?
​This Truth of War project has changed my whole understanding of war. I learned that there is happiness, horror, and grief in war. I learned that war is the worst, most gruesome humanity has come to. I learned soldiers met their best friends in war and also lost their best friend to war. I learned no veteran came home the same person they arrived with. I learned war will destroy you as a person. I learned the parents of the soldiers had to cope with the thought that their son will never come home. I learned soldiers would take photos, stuffed animals, anything that would remind them of home. We can find the truths in war by listening to veterans and reading books written by veterans. We can find truths in war by reading letters written by soldiers that were sent back to their families during the war. There is many truths in war, but the biggest truth is war is inhuman.

This is one of the letters my room exhibited made by me: 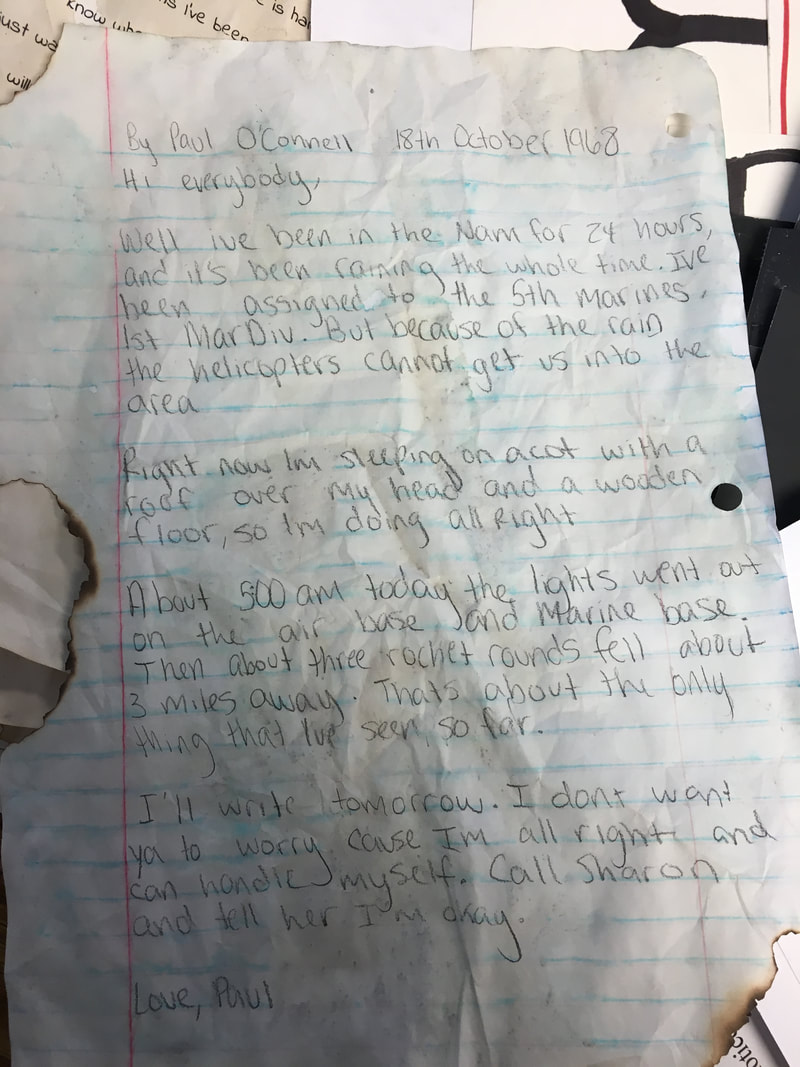